Since, I’m still waiting on test results and have various doctors appointments scheduled, I decided it was time to tear down the motor on Purple to get to the root of why she is drinking so much oil. Also to get her back together in time for a TW200 group ride in Joshua Tree. Well, it has been slow going project since it has been hard to undo some of the bolts on the motor. I would work on it for a day or two then I would need to take a break since my hands begins hurting again. At this rate, it does not look like I will get her put back together in time for the ride. Plus, once I took the piston out, it’s obvious that I was also burning oil too. I’ll need to order a new piston and send the cylinder out to a shop to have the scratches honed out. 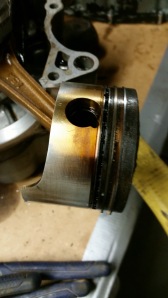 So onto a back up plan, the Progressive International Motorcycle Show (IMS) in Long Beach, CA also happened to be the same weekend as the ride. We decided to make it a family day out of it. The best part will be that I get to spend the day with my granddaughter. She was so excited that she will get to see all kinds of “motorsickle” as she would pronounce it. I always get kick out of the way she say it. She also said that she will be just be like her grandma riding motorcycle when she grows up. I sure hopes so. 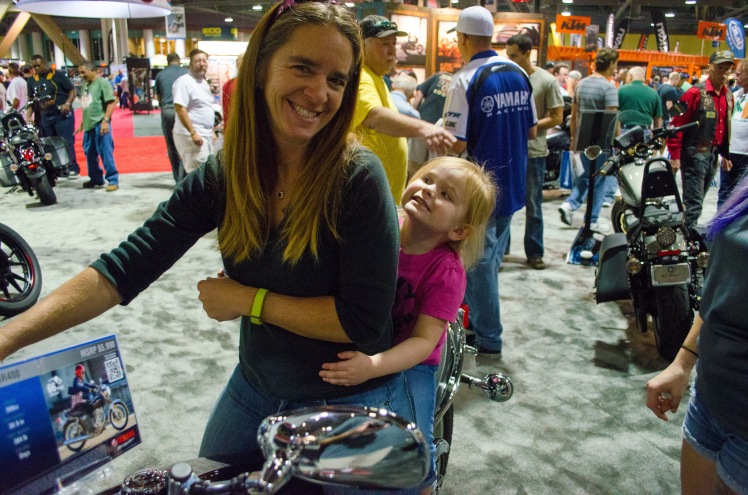 Once we got there, the first thing we did was made a beeline to the BMW booth to see the Adventure Trio. It has been fourteen months since we last went our separate ways. They were starting their journey south to the tip of South America and I will be escorting them part of the way. Unfortunately, that day was not a successful one for me. Originally, we planned to ride out of the Horizon Unlimited event in Mariposa, CA over the Tioga Pass and onto Benton Hot Springs for the night off of HWY 395. 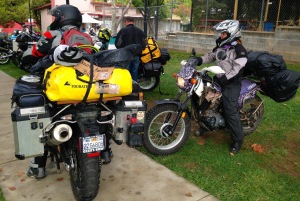 The sky was sunny when we started out and was able to sight see Yosemite a little bit but as the ride progresses, the weather turned south on us. At first it was a light mist, then it turned to a constant rain which no big deal as long we kept moving. However, once we got to Tioga Pass, I came to a complete halt. We all pulled over to see what’s wrong with my bike and we discovered that I broke my clutch cable. Due to bad weather, the Ranger could not get me a tow truck, so he had to take me to an overflow campground to hunker down for the night. Since, I wasn’t going anywhere, I told the Adventure Trio to continue on their journey. It was great to see all of them in one piece and to catch up on their and my journey. I felt bad for all of the attendees who wanted to meet them, we were so lost in conversation that we didn’t pay attention to our surrounding. Well, it was time to let them go so they can entertain the other guests and we made promises to catch up again soon.

With catching up out of the way, now its time to drool over all of the bikes that were on displayed. Since, I have been living on a dirt road, I have been hemming and hawing as to whether or not to trade in my current street bike, the Honda CTX700 for a more dual sport type of a bike. I still have the dilemma of being vertically challenge so there weren’t many options for me. After Tessah and I tried on many bikes, we have narrowed down the list to two of our favorite, the Yamaha SR400 and the Honda CB500X.

The Yamaha SR400 is the comeback of the old school style motorcycle. Low to the ground with a seat height of 30.9 inches, authentic kick starter with a decompression lever and an indicator window on the right-hand side of the cylinder to ensure an optimum start on the first try and 399 cc horsepower which is still enough juice for the highway. This look like to be a fun bike to ride around town. 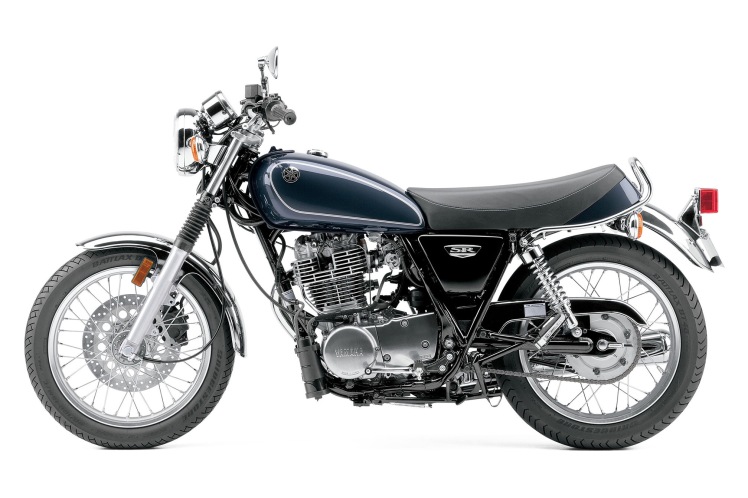 Then there is the 2016 Honda CB500X which to look like the child version of the African Twin. It is not quite as low as the SR400 at 31.8 inches but the after market offers lowering kit for this bike. The biggest draw of this bike for me is the classic upright riding position like a dirt bike which will give me room for control and maneuverability on the road. Also it is a bigger bike than the SR400 which will still give me enough power for the highway as well.

We had a great day at the IMS, caught up many old friends and even missed some, tested out some new products, and even bought some at a great discount. Sat on so many different bikes and sadden that the motorcycle industry is geared for tall people. With more and more women riders maybe one day the marketing people will realize that they need to provide more diverse type of bikes.

Being at the IMS made me miss and long to be back out on the open road. Hopefully soon, I will be and who know it just might be on a new bike.