The hardest part about this journey for me is trusting my own judgement. I’m very analytical by nature and loves to set goals. It is a lot of reasons how I was able to become a fully functional deaf person in a hearing world which isn’t always easy to do. Some people say that I’m stubborn or hard headed which is true but at least I’m not as bad as my father. As a child, I remember going Disneyland was like competing in a race. We had to be there an hour early and we would race through all of the rides at a fast pace. By the end of the day we were throughly exhausted.
One of the things I loved about Russ was his free spirited personality. He would easily get distracted by side roads and we never go where we intended to in the first place for the most part. I remember our first misadventure, it was right after he moved to the high desert and we decided to go exploring around the area in my car, a Toyota Corolla. Everything was going fine until we took a wrong turn on a road which ended up being quite sandy to the point where we got the car stuck big time. At the time, he was in a full leg cast after his horse accident, it was quite a scene watching him hobble around the back side of the car trying to shovel out the sand to put wood and board that we found to gain traction for the tires. Eventually, we were able to get the car out of the trouble spot. It was the first time and only time he got me flowers to apologize. Don’t knock him for not getting me flowers more often, I’m not a girlie girl who demand flowers for every occasions. Then anytime we set out for a trip, every time we come to a cross road, we would joke about our first misadventure and ask “Should we go left or right on Oak Road?” 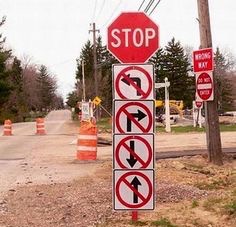 So when I planned to set out this journey, I set my eyes on eleven old U.S. back roads that I would like to travel on due to the historical significance of them. Many has asked me what my itinerary is so they can follow me along or join up with me. Also, since being on the road, I have had many other offers of couch surfing by fellow travelers. However, some of them were significantly out of the way. Others were on the way but I sometimes took a detour to see other things on the way which bypass their destination. Their feelings got hurt when I detoured. I’m such a people pleaser that it bothered me that I hurt their feelings when it shouldn’t.

So the hardest part for me has been knowing whether I’m being too stubborn and sticking to the original planned route or if I’m being a pushover and pleasing people by detouring off of it. After Russ and I first misadventure, we learned how to balance each other out. We still had quite an adventure every time we hit the road but also we are more cautious about whether we should go down that road or not.

At this point, I was really missing Russ, wishing that we could jointly decide which way to go. So, I decided to make a reach out call to a fellow solo rider and talk out my issues and feelings about traveling solo and to get his opinion on it. He has met Russ once at the Horizon Unlimited event. He reminded me that this trip is for me and not to feel obligated to do things that I don’t want to. If someone is offended then in the end that is their problem and not mine. He also mention that he imagine that since Russ passed away sometimes I might just want to be alone. So maybe I should ask myself what Russ would say and let the magic of the road guide me.

So the next day, I decided to let the wind guide me and ended up doing the route that I originally planned and when something look interesting while on the road then I took a detour. I just have to keep reminding myself just to take it one day at a time.