There are events and rallies throughout the world for all types of overland adventurers such Horizon Unlimited, Overland Expo, Overland Rally, and Touratech Rally.   It was at the Horizon Unlimited event where Russ and I got the travel bug and started dreaming about life on the road.  As you know, our dreams got cut short. So when I made my promise to Russ that I will pursue our dreams now rather than later, I began researching and preparing for the big trip.  While reading up as much information as I could about overland travel, I came across an event called the Overland Expo.  They offer classes, roundtable discussions and demonstrations for different type of travel whether it’s by 4-wheel or 2-wheel.  In addition, the event also host over 200 vendors of adventure travel equipment, camping gear, bikes, vehicles and services.  I figured that this will be the perfect place to get as much information as I can.

This year was my third year attending the event.  Originally, I wasn’t sure that I was going to attend this year.  I was still in a funk since returning home from my trip so I didn’t sign up to be a presenter. Plus, Purple was still under construction.  However, a couple of months before the event, I across a Facebook post by the staff of Overland Expo requesting help in finding an American Sign Language (ASL) interpreter for an attendee.  Hiring an ASL interpreter to provide the service required by law is expensive and they haven’t budgeted it to accommodate for that added expense.   Some of the comments on the Facebook post wasn’t very supportive to the needs of this attendee.  I was a little put off at first by these comments and was going unleash my opinion but realized that these comments were being made by ignorant people and doesn’t know what it is like being deaf or hard of hearing.  As being hard of hearing myself, I know what it is like not being able to understand what is being said and miss half of the presentation or show.  That kind of frustration makes you not want to go the movies, concerts, or any type of shows.

This remind me of the first time that I have had an interpreter provided for a comedy show.  Russ and I got invited to see the Blue Collar Comedy Tour with Jeff Foxworthy with some friends of ours. I was dreading going knowing that I would be lost in the translation and frustrated with missing half of what was being said.  You got to remember that I depend a lot on lip-reading to understand what is being said.  I have a 65 to 75 percent hearing loss but with the assistance of hearing aids, I can hear almost at the same level of a hearing person.  However, even with the assistance of the hearing aids, I can’t hear ‘s’, ‘sh’, ‘ed’, any sibilant (hissing) sounds, the intonation and/or the pitch of a voice that signal sarcasm or indicate the feelings on what is being said.  For example, if you ask a person how they are doing and they said good but with a flat voice tone.  A hearing person would know that the person is not being honest with their answer.  For me, I would have to look at the person facial expression to see that the opposite is true than what is being said.

Having that said, one of my girlfriend, who is a teacher for the deaf suggested that I get an interpreter for the show.  Me? I said to her. Mind you, sign language is my native language but was raised orally from fourth grade on and to this day, I do not use it every day.  I was raised with a mind-set that I’m not handicap and don’t require any assistance in functioning in a hearing world.  My friend finally convinced me that it would be helpful with the sarcasms, idioms and the meaning behind the jokes.  So, I called the event organizer and requested an interpreter for the show.  The event organizer change our tickets from the balcony to the front row so we see the interpreter up close.  I’m so glad that I went with her recommendation, it was the first time I could truly understand the meaning behind some of these jokes.  Actually, the interpreter and I became the centre of the show when Jeff Foxworthy started noticing that the interpreter was having difficulties with a sign for “Widjadidja” 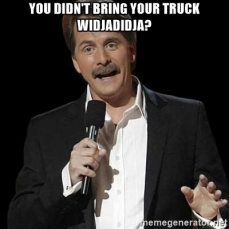 Even though, it became the centre of the show at one point, I became aware of how much I was truly was missing at event such as these.  I began requesting interpreter more and more.  I can now enjoy going to the show and not find excuses to not attend them.

With not seeing anyone stepping up to the plate on the Facebook post yet, I decided to reach out to the organizer of Overland Expo, Roseann Hanson, to let her know that I may be of assistance to them.  I was honest and up front with her stating that I’m hard of hearing and that I’m not fluent in ASL.  I suggested that they keep trying to find someone but will be available as a backup just in case.  I also let her know that the attendee may not accept me as an interpreter for a couple of reasons; one is that I’m not a certified ASL interpreter and two that I am known in the deaf community as “little d” 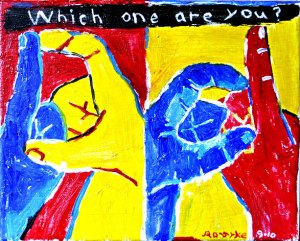 which mean that I was born deaf but do not socialize or immerse myself into the world of the deaf culture.  It can be viewed as a derogatory term when a deaf person who chooses to function and socialize in the mainstream society.

She took the information under advisement and contacted the attendee to see how she felt about it.  The attendee suggested that we have a Skype interview to see if my signing would be acceptable to her.  Man, I was so nervous about this interview that I actually hooked up with a friend of mine who is a child of a deaf adult (CODA) to practice conversing in sign language.

I guess the practice paid off! After the interview, the attendee had emailed Roseann to let her know that we had a good conversation and she doesn’t mind having me as an interpreter for her classes and workshops.  Now, I just need to start researching and learning the sign for some of the more technical words in overland travel such as “winching” which is the same sign as “towing”. 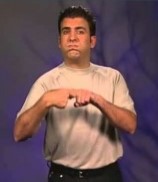