Today, I got my custom seat made for the TW200 by Seat Concepts.  The company is about sixty miles from where I live so it mean I had to go down the hill as us local calls it.  I live in the area called the High Desert which has an elevation of 4,000 feet and where most urban dweller lives are down the hill.  Since I wanted to avoid the freeway as much as possible, I took my TomTom Rider that I got for Christmas to show me the way.

Prior to heading down, I decided to review Google Map to get a feel of the route that I generally be taking and wrote it down onto the paper I kept in the map holder just in case.  Geez, the GPS took me on a couple of wrong roads both going down and back up.  Also, it was not user-friendly in trying to change the route.  Especially on the way home, it kept wanting to navigate me up through the mountain range which I knew wasn’t a good idea since the weather man called for a possible snow storm up there and I wasn’t geared for that kind of weather.  So I kept trying to change the route but it kept giving me these crazy route.  Luckily I’m not a typical girl who has no sense of direction.  Every time I felt that it was taking me in the wrong direction, I just steered back North West toward my destination.

Like I said, I actually have a sense of direction and know my North from South and East from West.  However, with more and more drivers relying on the GPS to navigate them to their final destination, there has been an increase of fatalities due to the misinformation that the GPS provide.  As drivers becoming more reliant on the GPS, they’re also more and more losing their common sense about the direction they’re given.

This remind me of an incident we had up here a couple of years ago.  A women driving from Las Vegas to Los Angeles followed her GPS direction to exit on Stoddard Wells Road and make a couple of right hand turns which ultimately had her onto the railroad track.  Now, I would think that common sense would have her to change direction and seek an alternative route to head to her destination.

Since “Death by GPS” is on the rise, many National Parks are now posting warning sign about it.  Here is what Death Valley National Park has posted:

GPS Navigation to sites to remote locations like Death Valley are notoriously unreliable. Numerous travelers have been directed to the wrong location or even dead-end or closed roads. Travelers should always carry up-to-date road maps to check the accuracy of GPS directions.

DO NOT DEPEND ONLY ON YOUR VEHICLE GPS NAVIGATION SYSTEM.

Using the TomTom Rider today has taught me a valuable lesson, do not rely on GPS only.  Actually, I wasn’t planning on it but wanted to have one in case I need to find a gas station quickly.  I will be using maps for my trip because I really want to focus on the old back road of America and I can’t program those road into the GPS.

So my excitement of getting a new seat from Seat Concepts only got mired by my frustration of the GPS sending me in the wrong direction.  However, I quickly cured my mood jumping onto a dirt road I knew to take the back way home. 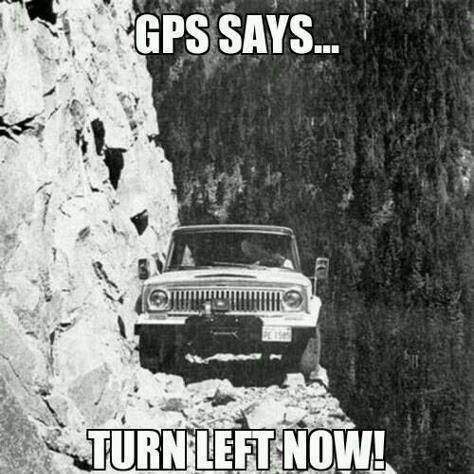