One day awhile back, a friend of mine and I were sitting at a coffee shop catching up on life but basically she was checking up on me to make sure I was doing ok.  She said that she noticed that I was riding my bikes a lot lately and asked what it is about riding a motorcycle that I find it so peaceful.

I sat there pondering on how to translate what I was feeling when I ride.  I then first explained to my friend the importance of focusing on my surrounding around me as I ride for safety reason.  You have to watch out for the pot holes, debris or the distracted drivers.  Basically spotting potential problems and take steps to avoid them before they become an accident waiting to happens.  This take intense focus when you ride.

However, when you ride for longer period or on long stretches of road with no one around, you start noticing the sights, the sounds and the smells around.  I’m always amazed that I can smell where the water is out in the middle of the desert.

Mainly, I explained to her that the chatter of everyday life just melts away when I ride and I find inner peace within myself. 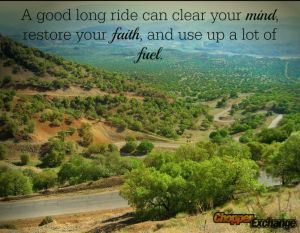 I even told her that as crazy as it sound, I feel the closest to my late husband when I ride.  I’ll just start having random conversation with him out of the blue.  The first time it happened to me was on Christmas day.

It was a couple of days after he passed away and I finally sent all of the family members home to celebrate Christmas with their own family.  I needed some time alone and decided to take a ride out to my friend’s resort in Desert Hot Springs who has offered me a room for the night to get away from it all.

It started out as a frustrating day.  I had a lot of trouble getting the TW200 started.  The battery was dead and the kick starter was not turning it over.  I checked everything that I could think of that would prevent the bike from turning over. Nothing, everything I tried didn’t work.  After a couple of hours, I just gave up and sat down and cried for the first time since his passing.  Just then my son called to check up on me and I told him what happened.  He turned the car around and drove back to my house to figure out what is going on.  He did the same thing as I did with no luck either.  We both sat down exasperated as to what could be wrong with the bike.  Since it was Christmas day, there was no way we would be able to get a new battery for the bike.  Eventually, I thanked him for trying and to head on home to his girlfriend and daughter.  He decided to try one more thing before he took off.  This time, he made sure that it was in neutral and put the kickstand up and then try using the kick starter once again.  Hallelujah, the bike started!!!  After turning off the bike again, he took a look at the safety switch on the kick starter and decided to disconnect it.  Now the bike will kick start every single time. Somehow, it was malfunctioning and prevented the bike from kick starting.

So after a half of day messing with the bike, I was finally on the road and noticed that there were hardly a soul on the road with me.  Half way there, I just started carrying a conversation with my late husband as if he was sitting a car with me.  It freaked me out when I realized that I was on a bike and I couldn’t be having this conversation to begin with.  Then calm came over me as I realized that he there with me watching over me as I ride.  Now I noticed that every time I ride, I feel the closest to him and talk to him often.

After I finished explaining to her what it meant to me when I ride and looked up at her, she smiled and said “well that is your meditation”.  I looked at her with a strange look and she then in turn gave me the definition of mediation.

I guess she is right; I don’t need to take a yoga class to reach a meditative state.  I do it riding my motorcycle.  I have had heard from other people that you can reach the meditative state while riding a lawn mower or even knitting.

3 thoughts on “Motorcycle and Meditation”